Don’t watch Football? Or any news outlets? Then you likely missed out on the latest Trump-roversy (get it, trump and controversy, moving on…) from this weekend. This latest presidential controversy started last Friday (09/22), when Trump announced at a political rally in Alabama that NFL owners should fire any “son of a b#$*h” who protests during the national anthem.

The players, coaches and owners of the NFL responded on Sunday where audiences of teams across the NFL saw displays of players kneeling, locking arms, or remaining in the locker room during the pregame performance of the American National Anthem. 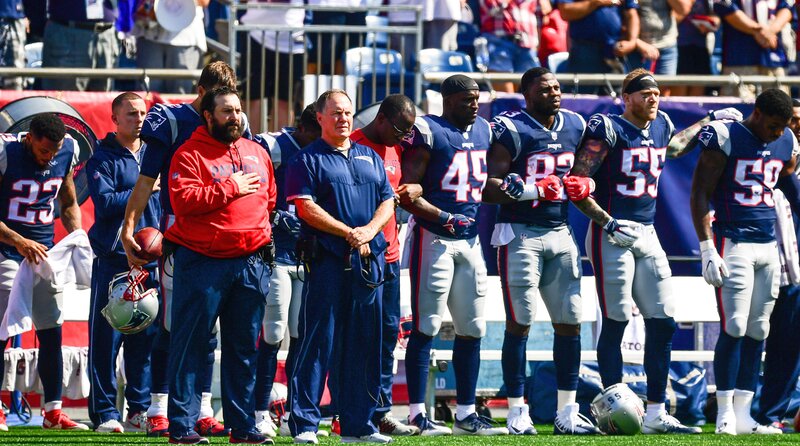 This was also after the president doubled down on his comments Saturday morning, tweeting he was rescinding a White House invitation to Steph Curry because the two-time NBA MVP was “hesitating” in accepting the presidential offer (in reality Curry had flat-out refused the invitation.) Hours later, Trump continued on his rant against NFL players kneeling during the national anthem. His most inflammatory comments came in a two part tweet where he said…

If a player wants the privilege of making millions of dollars in the NFL,or other leagues, he or she should not be allowed to disrespect….

…our Great American Flag (or Country) and should stand for the National Anthem. If not, YOU’RE FIRED. Find something else to do!

Within the NFL, a show of unity to support protesters emerged along with a strongly worded statement from the NFL commissioner, Roger Goodell,

“The way we reacted today, and this weekend, made me proud…I’m proud of our league.”

Even ardent Trump supporter, Robert Kraft (owner of the New England Patriots) said he was “deeply disappointed” in Trump’s remarks. As the highly rated Monday Night Football comes, it will be telling when another protest takes place in the Republican heartland of Texas. Football season only just started, will this be a continuing trend?

Get the best viral stories straight into your inbox!